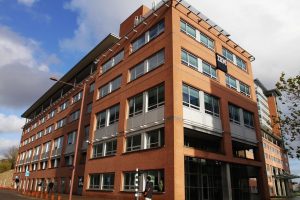 IBM wanted to concentrate all of its offices in the Netherlands in Amsterdam. Apart from concentrating the offices in Amsterdam the plan also included the implementation of a new office concept. A number of specific functions had to be accommodated in the new Head Office in Amsterdam, such as the Learning Center, Security Center, Customer Center and the Boardroom.

Project organization
First of all the functional and technical specifications were formulated and detailed for the Dutch office. These were then priced up and harmonized to the budget. The design work could commence once the interior designer and installation adviser were selected and contracted. This process was managed by bbn. The main contractor and the installation firm joined the construction team in the project organization, after which the design was prepared in detail and implemented.

Client and user wishes
A large number of IBM wishes and aims were integrated during the design and build. The building was stripped out completely internally. The building installations were completely renewed from the central rooms outwards. In the central rooms the installations were expanded and modified. bbn assisted and coordinated the entire process. The consequences of the choices made for the office concept were immediately visualized and incorporated in the design and build.

Installations
The installation package included modular walls, ICT cabling, hospitality and catering systems and access security. An emergency power supply and fitness center were added to this at a later stage.

bbn assisted with the design, procurement and implementation of the installation package on behalf of IBM. In addition, the design and the realization were tested and assistance was provided with the handover.