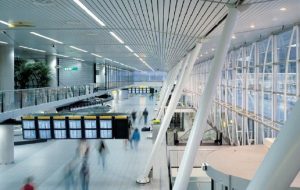 The terminal complex at Amsterdam Schiphol Airport has a gross floor area of around 550,000 m² and consists of approximately 16 building elements such as arrival and departure halls and piers. The first part of the complex was completed in 1967 and since then continuous expansion and modification has been carried out in order to accommodate the growth in passenger numbers at this Dutch airport.

Spaces
Within the terminal complex there is a variety of spaces such as hospitality & shops, offices, industrial spaces & warehouses, areas for baggage handling and parking garages. The technical management of the complex is the responsibility of the Terminal Real Estate Department; the functional and commercial management is undertaken by various departments such as Retail, Baggage and Passenger Services.

S-NEN 2580
On behalf of the Schiphol Group, bbn adviseurs developed a system for the administrative control and management of the terminal complex surface area, which was based on NEN 2580. Due to the very specific nature of the building, a number of aspects of NEN 2580 were refined to form what is known as S-NEN 2580. The terminal complex was then surveyed and plotted by bbn in accordance with this S-NEN 2580. After that it was established which Schiphol department was responsible for each area. Because the terminal complex is changed very frequently, bbn spent a year surveying and recording all of the changes. This change process has now been handed on. bbn regularly conducts audits so that it can be assessed whether the change process is being undertaken correctly and in a timely manner.