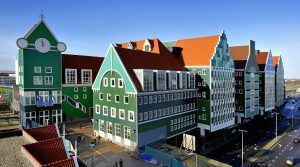 Zaanstad built its City Hall in the typical style of the northern Amsterdam region. Close to the capital city of the Netherlands, Amsterdam, the city of Zaanstad has good public transport links and is easily accessible by foot, bicycle and automobile. The building is located immediately adjacent to Zaandam train station.

Characteristic colors
The City Hall consists of a series of ‘houses’. These freestanding buildings reflect in a number of ways the Zaandam style of building, characterised by the use of materials and color. A specific Dutch building style that can also be found at the famous Zaanse Schans.

Welcoming
The City Hall is an open and welcoming place for residents, the council and municipal executives to meet. For the municipal organisation of Zaanstad, the City Hall offers a much improved office environment. Previously the organisation worked out of several locations. The total office area is 25,500 m², of which 21,500 m² is intended for around 960 workstations. The City Hall has a 2,000 m² assembly centre and a new municipal archive which extends to 1,650 m². A new bus station has been sited under the City Hall.